Li Shaoping, deputy director and distinguished professor of the State Key Laboratory for Quality Research in Chinese Medicine, University of Macau (UM), has been appointed by the United States Pharmacopoeia Convention (USPC) as a member of its Herbal Medicines Compendium – East Asia Expert Panel and will serve for a five-year term. The standards of the United States Pharmacopeia (USP) are one of the most authoritative standards worldwide and it plays an important roles globally in the quality control of drugs and healthcare products. Prof Li’s appointment to the expert committee shows the professional community’s recognition of Macao in the development of international standards for Chinese medicines.

The Herbal Medicines Compendium – East Asia Expert Panel aims to review the scientific, technical, and policy-related aspects of herbal medicines included in the USP, particularly the standards for traditional medicines in East Asia and related benchmarks. The standards of drugs, dietary supplements, and herbal medicines documented in the USP are the national standards of the US, and are used in more than 140 countries. Achieving a reputable, authoritative, and internationally recognised standard is key to the globalisation and modernisation of Chinese medicines.

A world-renowned scholar in the field of pharmaceutical analysis, Prof Li specialises in quality control and active ingredient research in Chinese medicines. His research team has contributed more than 10 per cent and 5 per cent, respectively, to UM’s rankings in the Essential Sciences Indicators (ESI) in the fields of Chemistry and Pharmacology & Toxicology, and the university is ranked among the top 1 per cent in both fields. In recognition of his outstanding achievements in herbal glycoanalysis and the development of quality control methods for Chinese medicines, Prof Li was included on the Power List 2020: Around the World in 60 Scientists, released earlier by The Analytical Scientist. He has played a pivotal role in the establishment of a joint laboratory between UM and the United States Pharmacopoeia Convention (USPC) for the development of quality standards for Chinese medicines. It is the first joint laboratory established between a university and the USPC. He and his research team also conduct research on the challenges and key issues in the development of international quality standards for Chinese medicines. Based on these studies, they have proposed new strategies for quality control of Chinese medicines, which are not only practical but also meet the requirements of international quality standards. As the result, six Chinese medicine standards established have been recognised by USP and were awarded certificates.

Prof Li’s team has also established a qualitative and quantitative analysis method, known as the ‘Saccharide Mapping’ method to determine the specificity of polysaccharides, based on the material basis characteristics of traditional Chinese medicine decoction. This method has received a number of national invention patents. The related papers have won a first prize at the Shimadzu Cup National Excellent Paper Award in Pharmaceutical Analysis and a first prize in the excellent paper category from the Chinese Pharmaceutical Association, for presenting a solution to a long-standing bottleneck in the development and production of carbohydrate drugs. In addition, the patented technology, ‘saccharide mapping’, has been successfully used in the quality evaluation of Ganoderma lucidum dietary supplements in the US, which has attracted considerable attention from related industries. 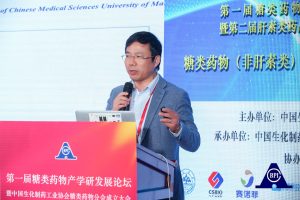