An inauguration ceremony for a research and development centre for Chinese medicine and translational medicine under Zhuhai UM Science & Technology Research Institute (ZUMRI) and an agreement signing ceremony for projects of the University of Macau (UM)-Huafa Group Joint Laboratory were held today (24 May) at the Traditional Chinese Medicine Science and Technology Industrial Park of Co-operation between Guangdong and Macao. Both parties hope that through the centre and the joint laboratory, a number of new technologies, new products, and new therapies can be efficiently commercialised to promote technological innovation at the university, the diversification of Macao’s economy, and the development of an international technological innovation centre in the Guangdong-Hong Kong-Macao Greater Bay Area, thereby taking the collaboration between Macao and Hengqin to a new level.

Witnessed by Li Guangning, general manager of Zhuhai Huafa Group Co, and Yonghua Song, rector of UM, representatives of Huafa and ZUMRI signed a collaboration agreement on 12 projects to be carried out by the joint laboratory.

In his speech, Rector Song said that UM attaches great importance to its collaboration with Hengqin. In March 2019, following the release of the Outline of the Development Plan for the Guangdong-Hong Kong-Macao Greater Bay Area, with the support of Hengqin New District, UM established ZUMRI as its first industry-academia collaboration demonstration base in the Greater Bay Area. In October of the same year, the university established a joint laboratory with Huafa Group. In December, UM’s three state key laboratories officially inaugurated their Hengqin branches. As of April this year, ZUMRI had received funding for more than 80 research projects from the Ministry of Science and Technology, the National Natural Science Foundation of China, and other science and technology departments at national, provincial, and municipal levels, and had undertaken nearly 40 research projects commissioned by companies in different industries, including Chinese medicine, microelectronics, smart city technology, as well as energy conservation and environmental protection. A number of industrialisation projects have been admitted to the institute. In order to promote innovative research and technology transfer in the fields of Chinese medicine and translational medicine, the construction of Phase II laboratories of ZUMRI was completed at the beginning of this year, and these laboratories comprise the soon-to-be-opened research and development centre for Chinese medicine and translational medicine.

Since August 2020, 12 promising research projects have been successfully admitted to the joint laboratory, laying the foundation for substantive, high-level, and sustainable industry-academia collaboration.

This year marks the 40th anniversary of UM. As the only comprehensive public university in Macao, with the care and support of the central and Macao SAR governments, over the years, the university has been dedicated to solving cutting-edge scientific problems while focusing on the major needs of Macao and the country, in order to promote innovation and technology for the sustainable development of Macao. 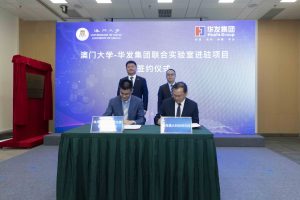 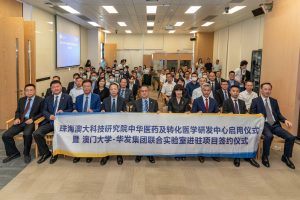 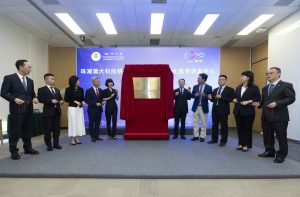