Chen Xiuping, professor in the Institute of Chinese Medical Sciences (ICMS) of the University of Macau (UM), has been elected fellow of the Royal Society of Biology for his distinguished contributions to the field of biomedical sciences. The achievement of fellow status of Prof Chen is also testament to the leading role of the ICMS in driving innovations and generating impactful research results recognised by the international academia.

As one of the most influential biological organisations in the world, the Royal Society of Biology is committed to promoting educational and academic activities related to life sciences, as well as the development of biotechnology. The society awards fellowships every year to influential scientists with outstanding contributions to their fields of research or to society around the globe.

Prof Chen has been dedicated to pharmacology research for years, with a focus on the development of new drugs for the treatment of cancer, inflammatory, and cardiovascular diseases. He proposed a novel non-apoptotic programmed cell death method, Noptosis, which has opened up a new subfield in the research of programmed cell death. Prof Chen is ranked No 53 among the 175 top scholars in the pharmaceutical discipline in China by Elsevier and No 64 among the top 100 pharmaceutical leaders of China in the Global Scholars Database in 2022. He has published more than 150 SCI papers in top pharmacological journals such as the British Journal of Pharmacology, Medicinal Research Reviews, and Pharmacology & Therapeutics, with more than 11,000 citations and an h-index of 57. In 2013, Prof Chen received the SERVIER Young Pharmacologist Award from the 17th Chinese Pharmacological Society. He has been awarded three projects from the National Natural Science Foundation of China (NSFC) and a number of projects from the Macao Science and Technology Development Fund. In addition, Prof Chen is a project reviewer for NSFC and the Hong Kong Research Grants Council, as well as a council member of the Chinese Pharmacological Society. 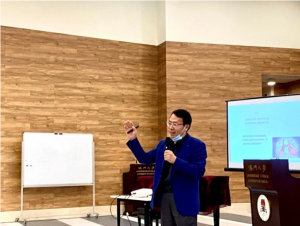 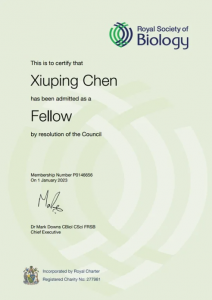 The certificate of Fellowship of the Royal Society of Biology