Two associate professors in the University of Macau (UM) State Key Laboratory of Quality Research in Chinese Medicine (SKL-QRCM), namely Chen Meiwan and Wang Chunming, have been elected ‘Qi-Huang’ Young Scholars (QHYS), in recognition of their exceptional achievements in the field of Chinese medicine. Launched by the State Administration of Traditional Chinese Medicine, the QHYS programme is a national talent programme, aimed at selecting 100 young scholars from across China with outstanding academic achievements and potential.

The use of bioactive components in Chinese medicine for targeted cancer therapy is a major challenge in the field of Chinese medicine research. Prof Chen has been engaged in the study of targeted delivery system for years. She is a recipient of the National Science Fund for Outstanding Young Scholars from the National Natural Science Foundation of China (NSFC), and has won a second prize in both 2012 and 2014 in the Natural Science category of the Macao Science and Technology Award, as well as a third prize in the same category in 2018. She also serves on the editorial board of several international journals indexed in the Science Citation Index (SCI), the administrative committee of the Chinese medicine pharmacy branch of the World Federation of Chinese Medicine Societies, and the committee of the biomedical polymer branch of the Chinese Society for Biomaterials.

The use of bioactive components in Chinese medicine for tissue repair and regeneration is a cutting-edge research area in Chinese medicine. Prof Wang has studied the development of polysaccharide-based materials for wound healing for years. He is a recipient of the National Science Fund for Outstanding Young Scholars from the National Natural Science Foundation of China (NSFC), and has won both a second prize and a third prize in the Natural Science category of the Macao Science and Technology Award. In addition, Prof Wang is a fellow of the Royal Society of Biology (United Kingdom) and has served as the executive editor of Chinese Medicine, a youth committee member of the Chinese Society for Cell Biology, as well as a youth committee member of the Chinese Medical Association’s orthopaedic branch.

The Macao SAR government attaches great importance to the development of Chinese medicine and technological innovation in Chinese medicine as part of its policy for economic diversification. Both professors conduct translational research of Chinese medicine, and they are grateful for the tremendous support of UM. Their being elected QHYS represents national recognition of the research capacity of the SKL-QRCM. 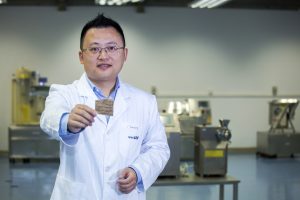